I have been using a gmail account as my primary email address since 2004. I don’t usually delete things, so I have thousands of emails in there. Depending on google to maintain this for me, without any backups, is kind of scary, but I have been putting off backing these up for a while now.

I’m aware that there’s a data export functionality. You should probably use that. A few years ago, that didn’t work that great. It failed creating full exports, and I had to resort to filter them by year to be able to successfully export them and download them. I hope this is fixed by now.

In 2014, I tried using offlineimap. I don’t remember what went wrong there, but I do remember that it took forever and failed a lot. It seems that it is being replaced with imapfw, but it isn’t ready yet.

This week I was cleaning up my inbox, and noticed that I get a lot of emails per day. I wanted to get an idea of what kind of emails I get, do some basic analysis.

Since I have found myself with a lot of free time lately, I decided to create a rust tool to back up the emails via IMAP. This would provide me with a local backup and allow me to have a local copy I can easily analyze.

Getting my feet wet

There’s an imap crate. I’ll be using that. To connect to your gmail account, you need to enable IMAP access in your settings. I also needed to create an “App password (by going to https://myaccount.google.com/apppasswords). Not sure if this is the safest thing to do.

Using the example in the imap crate readme, I was able to view the first message I have in my account.

Before starting to implement the backup process, I decided to get an overview of what I was getting into. I wanted to check how many emails I would have to backup, and, while I’m at it, how are they spread across the years.

This is what I ended up with:

This grabs each thousandth message and prints the message date. Running it as:

I would usually plot these with gnuplot, but decided to try R instead: 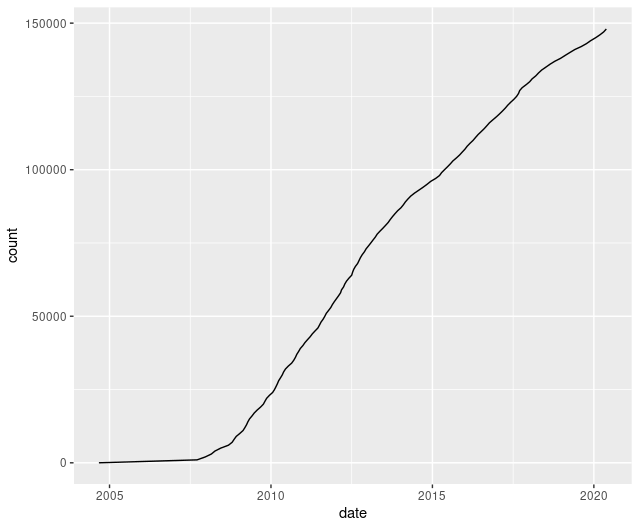 I have roughly 150000 emails in need of backup, and it seems that the new emails rate is decreasing.

To calculate the exact number of messages, I wrote an exponential search function:

Now that I have the exact number of messages that need to be backed up, I should store them.

Ideally, what would end up being backed up is what you see when, in gmail, you “Show original message”. Every header and body part. You can specify which fields are fetched in the second argument of fetch. Using RFC822 fetches the entire message, including headers.

You can also fetch more than one message per fetch by specifying a range in the first argument. I wrapped this in a messages function:

This is significantly faster than fetching messages one by one. Comparing the batched versus the one by one method:

In this scenario, batching was 3 times faster. These results are not super precise, the time to fetch a single message varies a lot, but I don’t see why batching would be worse.

With the body and message unique identifier loaded, the next step is to store it in the file system:

This stores one email per file, in the messages/ directory, in the format specified by RFC5322 (which supersedes RFC2822 and RFC822).

The base parameter will allow me to resume downloading if anything fails, or to fetch new emails incrementally. I increased the batch size from 100 to 500.

This is good enough for a first prototype. If I wanted to turn this into a library, I would create a message iterator with built in batching.

I could try to paralelize these requests with multiple IMAP sessions. Using 10 workers could improve the running time to 5 minutes, assuming there are no server side bottleneck. According to GMail’s support page, “You can only use 15 IMAP connections per account”. They don’t mention any other limits.

Reading 9.6G spread across 150k files in a single run is not going to be fast. I used mailparse, and it takes ~70 seconds to read every file and pass them through the parse_mail function.

During parsing, I found two malformed emails coming from Yahoo, when they were handling the Delicious data migration. There was no empty line between the headers and the body.

I tried fetching the date of each email, using mailparse::dateparse, but I hit some malformed headers as well. Here are the malformed ones I found:

I solved these with a bunch of string replace function calls. Using itertools and chrono, I calculated the maximum number of emails per day:

This takes too long to process, so I may decide I want to store both the original message and a pre-processed index somewhere. I could create a mbox file per year, for example, or store them in a sqlite database.

Thanks to the imap crate, I was able to quickly download every email from my gmail account. With mailparse, I can run some analytics on my emails. I also have the ability to add some automation, like turning newsletters to RSS feeds, or register invoices in ledger.

I’ve published these tools under an MIT license. You can check it out at: